In The Uncertainty Mindset: Innovation Insights from the Frontiers of Food, Vaughn Tan examines ‘the uncertainty mindset’ as a model for understanding how teams use uncertainty to organise for innovation, focusing on the world of high-end cuisine and the organisational design of elite culinary research and development teams. Reflecting on the book during the COVID-19 pandemic, Anna Nguyen welcomes this insightful restaurant ethnography’s rich prose that draws on abundant interviews, fieldwork and archival research, but questions whether novel approaches to scientific experimentation are the solution for a restaurant industry that is currently struggling to survive. 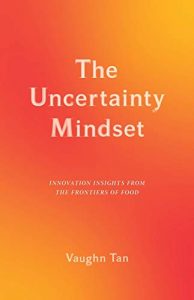 Since the start of the COVID-19 pandemic, everyday institutions like the restaurant have been extensively analysed in media reporting. For some time, the ghostly dining room was a literal metaphor for waning business operations; some beloved eateries have closed. The fate of the restaurant continues to be a headlining topic, a repeated cautionary tale of how capitalistic systems of oppression have long-term impacts on economic restructuring and survivability. As local and global economies have gradually reopened, one can see the continued tensions between the tired neoliberal argument (‘vote with your fork and money’) and state and public health mandates and guidance from the Centers for Disease Control and Prevention and the World Health Organisation.

How do we write, analyse and observe the restaurant today, in ways that reflect the realities that we live in, as the dominant semblance of normalcy can no longer sustain our lives and livelihoods? Another question we should ask is what is the role of restaurants now, during and post-COVID? Reading sociologist Vaughn Tan’s new monograph, The Uncertainty Mindset: Innovation Insights from the Frontiers of Food, is both insightful and a rendering of a pre-pandemic ethnographic artefact. In the preface, Tan acknowledges that his restaurant ethnography began ten years ago, when he started his fieldwork in November 2010 with chef José Andrés’s culinary research and development team, ThinkFoodGroup. Tan’s focus is on the utility of organisational sociology for studying and managing teams that value innovation.

Conceptualising ‘the uncertainty mindset’ as a model to examine how an organised team works, Tan’s aspiration is ‘to build robust responsiveness and flexibility by injecting uncertainty into its structures and ways of working’ (x). Thus, what he considers to be cutting-edge cuisine is a complementary ‘model system for understanding the uncertainty mindset and its consequences for organizations in other industries’ (xi). This working model is present throughout the seven parts of Tan’s book, each section offering two chapters that draw from his abundant interviews, fieldwork and archival research.

The first two chapters chronicle the changing landscape of the restaurant, and Tan cites Gary Alan Fine’s own foundational restaurant ethnography, Kitchens: The Culture of Restaurant Work, as a starting point. One can read Tan’s research as a more technoscience-focused analysis of restaurants and restaurant work in the way he values innovative experimentation. Tan is most explicit in Chapter Two, where he notes that technological developments have changed the ways we eat at, dine and critique restaurants. Because Fine sees organisational sociology as grounded in interactionist and cultural concerns in networked communities like the restaurant, his writing reflects the kitchen as both a social world and an institutional environment. He sees restaurants as obvious symbols of a free-market economic, capitalist system. In contrast, Tan’s lesson is that innovation and competition are vital forces, and that restaurants should develop a Research and Development (R&D) model to stay ahead in the market because change is unpredictable and its consequences uncertain.

However, Tan proposes to see uncertainty as an opportunity to move forward with experimentation. In Chapters Five and Six, in the section titled ‘Innovation is Uncertainty’, Tan notes that high-end cuisine chefs and R&D teams must tolerate failure in order to progress. The difference between uncertainty and risk, Tan writes, is that risk implies we live in an uncertain world, but fundamentally we know what the consequences might be. True uncertainty can only be experienced through experimental practices where one does not know what the outcome could possibly be (77-80).

Tan’s citations and points of reference are quite common among those who combine research on food with a scientific angle. He invokes chemists Nicholas Kurti and Hervé This as pioneers in the creation of gastronomy as a field and discipline, popular science food writers like Harold McGee and food science spaces like The Cooking Lab in the US, the Fat Duck’s Experimental Kitchen in the United Kingdom and the MAD Foundation in Denmark. As one would expect from any restaurant ethnography, Tan offers rich prose and thick description of chefs tasked with perfecting a dish and its components during service time.

But what is most compelling is Tan’s final section, ‘Insights from the Frontiers of Food’. He repurposes Proust’s madeleine as a guide to culinary experimentation. Where many use this very fleeting vignette from Proust’s 1907 novel À La Recherche du Temps Perdu (In Search of Lost Time) as an opening to memories through food, Tan reads it as a chef’s desire to invoke a powerful emotion in the diner through successful experimentation (216). Likewise, the chefs at the Fat Duck aspire to weave personalisation and narrative in their menu, a sign that there are new ways to narrate food.

Curiously, Tan purports that ‘not much is known at the moment about how to tell stories through the medium of food. The current culinary understanding of narrative is thus in an embryonic state – similar to the understanding of science in application to cuisine decades ago. It took several decades for many people working individually and collectively to build the technical foundations for creativity we have today’ (217-218). To flesh out this statement, Tan illustrates Andrés’s humanitarian work after the 2010 earthquake in Haiti by creating a non-profit organisation named World Central Kitchen (WCK) (222). Since its inception, WCK has provided post-disaster food relief when Hurricane Maria struck the eastern Caribbean (223-25). Tan emphasises that Andrés and his team had to think creatively to create and distribute large-scale nourishment in the face of adversity.

The pointed rhetoric on innovation, efficiency in labour practices, competition and experimentation in Tan’s case study of high-end cuisine was likely shaped by his previous professional background working for Google, which he mentions in the Preface. In a recent Guardian piece about the possible silver lining of rethinking restaurant spaces, food writer Jonathan Nunn cites Tan’s book and quotes him as saying ‘that this crisis will force the industry to ‘‘fundamentally rethink what it even means to be a restaurant’’.’ But, as Nunn’s article suggests, there remains a troubling notion of innovation through competition in times of global economic crisis, where inequalities are laid bare. Likening a restaurant to a space for scientific creativity and experimentation may be a solution for some restaurants with higher capital, but not for ones who do not serve and make ‘high-end’ cuisine. There are limitations to this solution, especially when we are collectively asked to reimagine how institutions like the restaurant should respond to the scientific dimensions of our social lives. Tan argues that novel approaches to scientific experimentation are a solution to the failing restaurant industry, but that means that science, too, is just part of our capitalistic market system where only the dominant actors with the means and funds can survive. This kind of world is not a reimagining as much as a re-entrenchment of capitalist and colonial systems, where science accompanies power rather than counters it.

Note: This review gives the views of the author, and not the position of the LSE Review of Books blog, or of the London School of Economics.