Join us to hear from leading experts on innovation in education both globally and locally. The keynote speaker will be Dr. Clark G. Gilbert, president of BYU-Pathway Worldwide. Following President Gilbert, contributing authors of the publication and Utah policymakers will discuss a wide array of topics including competency-based education, flexible spending accounts, restorative justice in school discipline, costs of higher education, public/private partnerships, industry pathways, and the future of teaching as a profession.

This event is also being offered to licensed educators as a professional learning activity for two license renewal points (2 hours). Printed certificates will be made available at the event.

Parking Instructions: Event parking will be provided in both the A. Ray Olpin University Union Building north parking lot and the Hedco Building south parking lot, both of which are a short walk to the Gardner Commons. Both parking lot entrances will be clearly marked with a sign that reads, “Sutherland Institute Event Parking.” 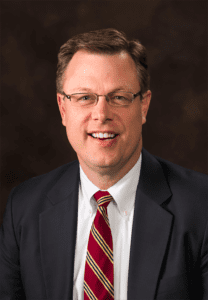 Prior to his new assignment, President Gilbert served as the 16th president of Brigham Young University-Idaho. As president of BYU-Idaho, he focused on increased access, student mentoring, and the growth of the university’s online programs.

President Gilbert graduated from Brigham Young University with a bachelor’s degree in International Relations. He earned a master’s degree in East Asian Studies from Stanford University and a doctorate degree in Business Administration from the Harvard Business School. President Gilbert was born in California and raised in Arizona. After serving as a missionary for The Church of Jesus Christ of Latter-day Saints in Japan, he married his wife, Christine. They are the parents of eight children.