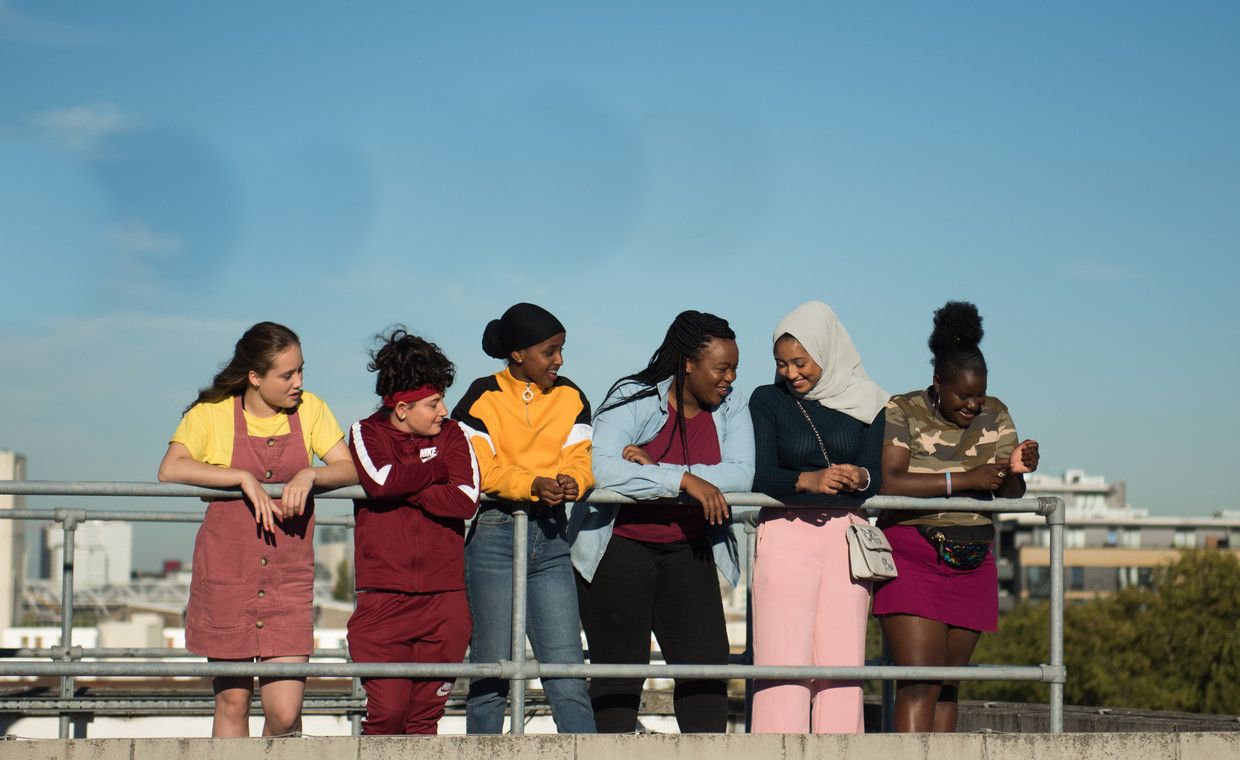 Rocks’ (2019) production began with the casting of the school girls who would be the focus of this tender coming-of-age film in modern London. The process from then on was deeply collaborative; adapting the script constantly on set and all the young leads ad-libbing the dialogue.

The film was also shot with a documentary feel and it clearly owes a debt to the films of the French New Wave, specifically Francois Truffaut’s The 400 Blows (1959). All this gives Rocks an authenticity and edge over American coming-of-age films.

Rocks captures a formative week in the life of the titular Rocks (Bukky Bakray) as she attempts to deal with her mother leaving, without warning, while protecting her younger brother Emmanuel (D’angelou Osei Kissiedu) and dealing with all the other tribulations that come with being a teenager.

First time actor Bakray is phenomenal as the film’s protagonist, selling her character’s vulnerability and the facade that Rocks utilises in order to deal with her life altering situation.

Director Sarah Gavron and collaborators brilliantly balance the joy that youth brings with the bleak and tragic situation Rocks finds herself in. It achieves this by presenting characters that feel authentic; the cliques and conversations in school are genuine, the characters that inhabit the screen talk like real teenagers. Their homes feel lived in and even the smallest of dramas are dealt with seriously. All these factors create a world that is diverse, playful and true.

First time actor Bakray is phenomenal as the film’s protagonist

A detracting aspect however, is the relentless tug of war between creating an observational-style plotless film and simultaneously wanting to craft a story with regular plot beats. The film then does neither, as although Rocks is rather plot-light, it still falls into regular plot-trappings such as the argument and subsequent separation of the best friends, and the arrival of a new girl at school.

This is perhaps where the film needs a singular director’s vision, to create a more nuanced and slightly less muddled narrative.

The film overcomes this through its heartfelt depiction of human behaviour through a teenager’s eyes. The film soars the highest when it zones in on Rocks’ need to appear like she’s in control of her ever-spiraling conundrum.

Rocks seemingly wants to prove that she can handle this situation by her own means. This offers a tangible element of Rocks’ life providing an insight past her emotional barriers, hence providing a more deeply emotional experience.

Season 2 of The Boys is ‘bloody’ hilarious

The year ahead with InFilm Bristol

This collaborative experiment is valiant and bold, charming and raw, but as with every experiment there are faults and frustrations which occasionally deny Rocks from reaching truly authentic heights.

Though, through slight bumps and hurdles along the way by the crescendo of this formative tale Rocks has the viewers in the palm of its hand, eagerly and tensely awaiting a girl coming of age surrounded by a vibrant group of teachers, friends and neighbours.

Did you see Rocks at The Watershed this month?