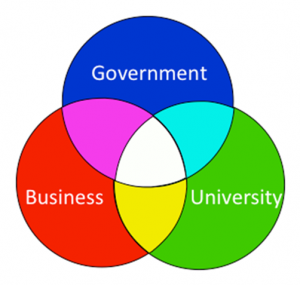 The triple helix model of innovation refers to constant interactions between academia, industry and governments to foster economic and social development. The model emphasizes on boosting innovation for a development. It describes the role of university to join hands with industry and government. It explains social formats for the production, transfer and application of knowledge. Triple Helix covers the creative destruction – a concept coined by Joseph Schumpeter in 1942 which describes that new innovations kill the older ones. Innovation arises within each of the three spheres – university, industry and government. Creative destruction cannot be avoided when we embrace innovation. In an economic sense, creativity can produce some destructive consequences.

Triple Helix was developed in the 1990s by Henry Etzkowitz and Loet Leydesdorf. The best example of Triple Helix is Silicon Valley. The government provided land, flexible financing, stretched tax holidays and fitting guidelines to the IT cluster in California, US. The small and big IT businesses thrived in this cluster. The world has seen success stories of Dell, HP, Oracle, Intel, Microsoft etc. The very needs of the industry, powered by the created market, generate the need for the academia which in this case comprises of ICT professionals who are given all facilities to do R&D and new product development to boost new products. Government, industry and academia all profit as taxes are collected on sales of goods, revenue is generated and knowledge is developed inside a suitable research environment.

Silicon Valley has given rise to consumerism. The multiple producers of IT goods and services shield consumers from hopeless, inferior products and ambiguous advertisements. Also unfair pricing does not work because of intense competition. The ever-expanding consumption of IT goods and services is beneficial to the economy. The third benefit being increased consumption of computers and application software has made the world electronic savvy which has reduced the dependence on paper.

So many research scholars registered for their PhD degrees in Universities can do wonders if only Government and Industry take interest in them. Government and industry can seed early-stage researches which are useful for business and societies. Progressive organizations increasingly seed it in areas of interest to them. They work closely with the progress of the PhD by funding or co-funding. Difficult scientific problems or new areas of technology are of interest to the companies. Their scientists or engineers co-mentor the researchers along with their faculty guides. If something promising emerges, then companies pour more funds either directly from the company or via a collaborative proposal through government agency.

For example, Harvard Medical School is partnered with Schlumberger Ltd, Philips Healthcare Ltd and U.S. National Institutes of Health. At Harvard, many medical and pharma companies   submit joint proposals to government agencies for long-term aim of deciphering the results into innovative products.

Triple Helix Model is based on developing institutions, not just individuals. Innovation is the key in any research. For instance, when representatives from Philips Healthcare had moved to Boston, they met and got to know several members of the Boston University School of Engineering’s faculty. Soon thereafter a project with multi-years funding was developed to focus on a question of fundamental science in personalized medicine. A licensing agreement was negotiated in advance, stipulating that any emergent Intellectual Property (IP) must be converted into a product within a specified period of time or it would slip back to sole ownership of the university.

Red Hat, Inc. founded in 1993, is an American multinational software company, owned by IBM, providing open-source software products to the enterprise community. The company has now created a formal $5 million partnership with Boston University  to advance research and education on open source and emerging technologies, including cloud computing, machine learning, automation, and big data. The fund runs the scope from co-supervising PhD and post-doctoral students to fund collaborative projects with faculty under the umbrella of what is called the Open Cloud Computing Initiative. BU and Red Hat will jointly license co-developed technology while each party retains exclusive rights to its pre-existing IP. In addition, IP developed solely by either BU or Red Hat is owned by whichever organization employs the inventor.

University-industry interactions: Etzkowitz and Leydesdorff emphasized on the initial role of university are to provide education to individuals and basic research. It’s like a Linear Model of Innovations; universities are supposed to provide the research on which industry builds commercial goods. The other interactions take place through the involvement of industry managers and university faculty in both sectors. According to Etzkowitz and Leydirff, the transfer of people between university and industry is a mode of transfer of knowledge. A university flourishes because of research, and industry grows on research in universities.

Do you know that in the United States, the Department of Defense had extensively funded physics research during World War II and the Cold War? Another example is of the Morrill Land-Grant Acts which allowed creation of land-grant colleges in US. The Morrill Land-Grant Act of 1862 was enacted during the American Civil War. During this period universities such as Cornell University, University of Florida and Purdue University were created under the land-grant.

We need universities with a core mission of producing the educated population that’s needed to build, run and work for flourishing an economy. Today in India how many universities have been able to connect their activities to society and the nation’s economy? Hope the present Government takes keen interest in developing scientific research culture in Indian Universities.