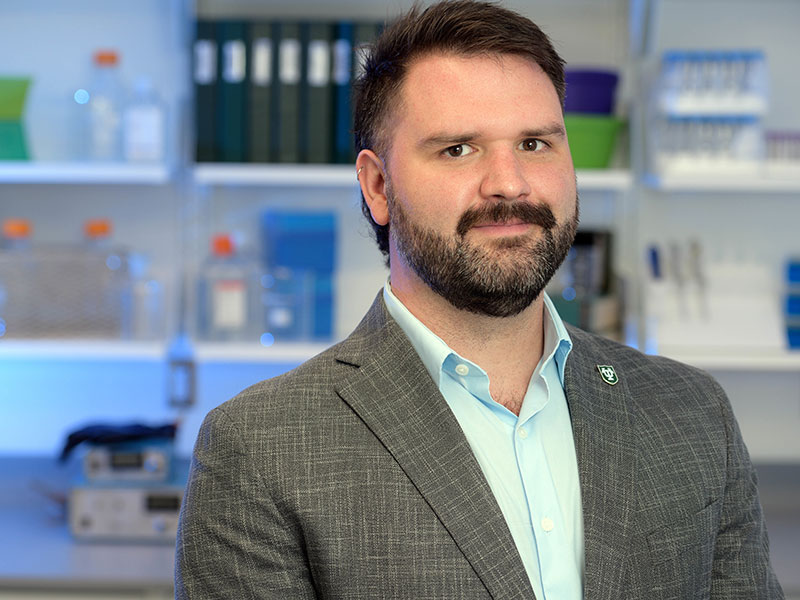 The Tulane University Innovation Institute has announced Clay Christian, PhD, as its first director of commercialization intelligence and assessment. This role is responsible for “filling the top of Tulane’s innovation and technology funnel,” which requires a unique skill set: deep scientific knowledge, the ability to bridge disciplines, and an appreciation for engaging students and faculty as they develop ideas.

Christian is “home-grown,” having previously served as director of business development in the School of Medicine’s Research Business Development Office.

At the Innovation Institute, he is responsible for serving as the interface between faculty and trainees and the institute, talking to them about their research, and providing guidance to engage in the institute’s resources as they seek to further develop their creative ideas and science to impact society.

Kimberly Gramm, Tulane’s inaugural David and Marion Mussafer Chief Innovation and Entrepreneurship Officer, said, “Clay was tailor-made as our first hire to build teams around technologies for programs like NSF’s I-Corps and to identify commercialization strategies. In addition, his core competencies and deep institutional knowledge make him an ideal person to lead efforts and to provide early-stage assessment support of nascent technologies.”

Christian was involved in the Innovation Institute from its earliest days. Katie Acuff, associate vice president for principal gifts, recalled how valuable Christian’s assistance was in laying the groundwork for Gramm’s arrival.

“Clay’s hard science background, experience in business development, and his ability to leverage data and analysis to tell a compelling story provided key insights for the institute’s foundation and framework. I was thrilled he was able to come into the institute as the first hire under Kimberly.”

At the School of Medicine, Christian was responsible for cultivating relationships between the School of Medicine’s research enterprise and outside collaborators. He was also responsible for special projects like the School of Medicine’s COVID-19 Digest digital publication, which earned him aPresident’s Award for Excellencein 2020. Christian’s expertise in early technology assessment was honed during his time as a freelance consultant, during which he evaluated nearly 200 early-stage university technologies for commercial potential. In addition to his PhD training at Tulane, he received postdoctoral training at St. Jude Children’s Research Hospital.

Asked what else Christian brings to the table as “Employee No. 2,” Gramm laughed and said, “The same standards of excellence he applies to his work and research, he also applies to food and wine. As a new person to New Orleans, I have had the pleasure of benefiting from him being a NOLA foodie.”

New Director of Commercialization Intelligence and Assessment Clay Christian is the first of many hires that will help the Innovation Institute be a true catalyst for research innovation and commercialization here at Tulane.

Tulane Innovation Institute has announced Clay Christian, PhD, as its first director of commercialization intelligence and assessment. Christian was the first person hired by the institute’s director, Kimberly Gramm.