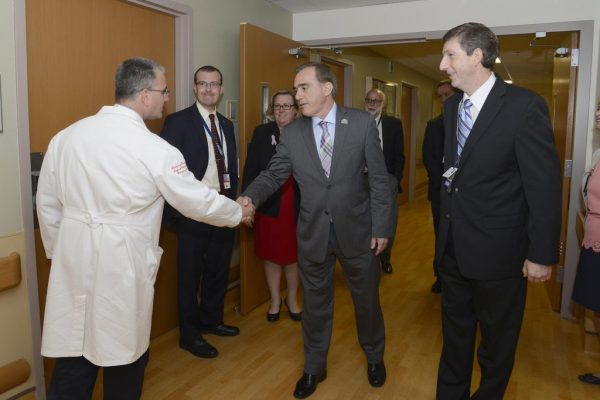 David Shulkin, the former secretary of the U.S. Department of Veterans Affairs, has been tapped as chief innovation officer of Sioux Falls, South Dakota-based Sanford Health, a nonprofit system with hospitals in nine states and three countries.

Shulkin is also a board-certified internist, having earned his medical degree from the Medical College of Pennsylvania.

In his new role, he will lead innovation initiatives at Imagenetics (Sanford’s genetics facility) and in various other areas, including research. He will also be a director on the Sanford International Board and an ambassador for Sanford Health on its U.S. and international projects.

In a statement, Shulkin commented on his new position:

After completing my work in the public sector, Sanford Health was an obvious choice to continue my healthcare career. Sanford’s unique brand of innovation and clinical integration is bringing precision medicine to the bedside which is rapidly improving patient care in unprecedented ways. I look forward to joining the Sanford team and bringing my background and skills to help drive these advancements in medical practice.

Prior to joining the VA, Shulkin served as president and CEO of Beth Israel Medical Center. He was also CMO of Temple University Hospital.

Back in 2015, then-President Barack Obama chose Shulkin to serve as undersecretary for health in the Department of Veterans Affairs. In 2017, President Donald Trump selected him as VA secretary.

But by March of this year, Shulkin was no longer with the VA. Shulkin said he was fired, but the White House asserted that he resigned, according to Politico. But later, the White House said Shulkin was offered “the opportunity to resign,” Politico noted.

Learn about how well executives are dealing with value-based care (VBC) models, and what technologies they’re using to achieve their goals.

President and CEO of BioEnterprise, Aram Nerpouni, sheds light on the biomedical investment and innovation climate in the Midwest and how Cleveland is contributing to the region’s growth