Agricultural experts agree: Hawaii has plenty of potential to become a global hub for innovation. 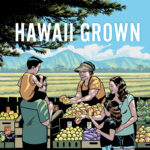 But turning potential into reality will require significant investment and creative thinking, as Hawaii’s agricultural industry deals with its own productivity issues and slow adoption of technologies among food producers.

Just how to coax Hawaii’s farmers and ranchers into adopting more technology was a central question at the inaugural Tropical AgTech Conference in Hilo on Thursday, a two-day event attended by local and global experts from around the world.

Accessibility, suitability and affordability are three key reasons why Hawaii’s farmers have not taken up new agricultural technologies, which has left the state trailing behind others as they increase their efficiency in the face of climate change and other global pressures.

Developments in agricultural technology have so far been isolated to massive operations on the mainland and Europe growing few crops, which can afford to invest billions of dollars in the development and integration of technologies that maximize outputs and profit.

Slow uptake of technology was not because of ignorance or being stubborn, according to Michelle Galimba, who runs Kuahiwi Ranch on the Big Island.

“We keep hearing about how Hawaii farmers are slow to adopt ag tech,” Galimba said during a panel discussion. “We’d be all over it if it was useful and appropriate tech.”

There’s no doubt technology is useful for agriculture. With drones and special sensors, farmers can predict their output. With genetics, they can remove genes that make them prone to disease or give them genes to prolong their shelf life. They can use robots and artificial intelligence to weed their crops.

But that’s on the mainland, where technological innovation has been focused on major crops, which does not align with Hawaii’s agriculture, a diverse group of farmers with multiple crops on small tranches of land. Even some of the state’s biggest crops — papaya, bananas or sweet potato — are completely different than what’s on the mainland.

That has left Hawaii’s agricultural sector stagnating, as the rest of the country continues to improve its agricultural efficiency by making its workforce more efficient and effective.

The low adoption rate meant 40% of Hawaii’s farmers expenses going to labor in 2017, compared to 19% in California, according to the University of Hawaii Economic Research Organization. Meanwhile, Hawaii’s labor productivity — calculated by dividing gross receipts by the number of workers — is half of what California’s is.

This disparity is not because labor is more expensive than California, rather it’s an indication that Hawaii has not automated as much of its food system or adopted as much technology, according to Jesse Cooke, vice president of investments and analytics at Ulupono Initative.

And considering Hawaii’s current labor struggle, it could be all the more helpful.

“It’s not wages,” Cooke said. “What’s probably going on is California farmers are probably able to replace their labor with technology.”

Experts from the mainland and globally recognized at the conference that Hawaii faced several hurdles, but the task was not impossible.

And, in helping Hawaii’s farmers implement technologies, it will have a ripple effect for the rest of the tropics.

Professor David Slaughter, director of the Smart Farm Initiative at University of California Davis, says some businesses had begun charging farmers for technological services that could help them predict outcomes or diagnose problems on a per-acre basis, making it more accessible.

Cooperative models that follow what Slaughter calls a “service model,” rather than a “purchase model,” have been tested in Hawaii and have shown promise, notably as food hubs.

There remains a disconnect between computer sciences and agriculture students and faculty though, says Bruce Mathews, dean of UH Hilo College of Agriculture, Forestry, and Natural Resource Management.

The result is that someone might be able to fly a drone and interpret data but cannot translate that into advice for the farmer.

“We have to facilitate their cross pollination,” Mathews said.

There is a lot of opportunity that comes with the simple use of a smart phone, which can link to technologies filtered through cloud software, such as weather, pest and yield information from satellites.

According to Mathews, it’s not necessarily a matter of developing new technology to suit Hawaii and the tropics, it’s about adapting what already exists.

But not everything needs high levels of technology, as contained agriculture – like greenhouses or hydroponics — can help boost yield as it removes the pressure from drought, pests and invasive species.

Nonetheless, because Hawaii’s farms are generally smaller — a majority of Hawaii’s farmers earn under $10,000 per year and farm on small plots — it means the rest of the tropics could benefit.

Jane Kleissner, co-founder of KL Felicitas Foundation, says that means geographically appropriate and cost-effective solutions will be in high demand, considering the population of the region and how many small farmers there are.

Doing It Right, This Time

A degree of skepticism about integrating technology on farms is to be expected, speakers acknowledged, considering Hawaii’s historical experience of outsiders doing agricultural prospecting.

Integration and recognition of indigenous knowledge in the global food system is considered as an important step toward a more sustainable food system as well. For Native Hawaiian agriculture, that means sustaining a reciprocal relationship with the land.

There was a general acknowledgement of the importance of engaging indigenous communities and food systems to ensure the development of culturally appropriate technology, while also looking for opportunities to collaborate in the best way possible.

Arama Kukutai, CEO of indoor vertical farming company Plenty, told conference attendees of that the conversation had to be had with the community before anything else.

“And secondly, it’s really important that community knowledge from indigenous sources is not being appropriated by corporate interests,” said Kukutai, a Maori New Zealander. “It’s just another form of colonization and this is the 21st century. I think we’re past that.”

“Hawaii Grown” is funded in part by grants from the Ulupono Fund at the Hawaii Community Foundation and the Frost Family Foundation.

The post Involving Farmers Is The Key To Innovation And Better Ag appeared first on Honolulu Civil Beat.